What Is OpenAPI (Formerly Known As Swagger)?

From the OpenAPI Specification repository:

The OpenAPI Specification (OAS) is a community-driven open specification within the OpenAPI Initiative... [that] defines a standard, programming language-agnostic interface description for REST APIs.

Use cases for machine-readable API definition documents include, but are not limited to: interactive documentation; code generation for documentation, clients, and servers; and automation of test cases.

The OpenAPI Specification does not require rewriting existing APIs. It does not require binding any software to a service — the service being described may not even be owned by the creator of its description.

To see our most up-to-date support for the OpenAPI Specification (including our support for OAS v3.1), see our compatibility chart.

The API Reference section of your docs will generate reference guides based on your API definition that include working code examples and the ability to make authenticated API requests directly within the documentation.

Got a Postman Collection? We support that too! 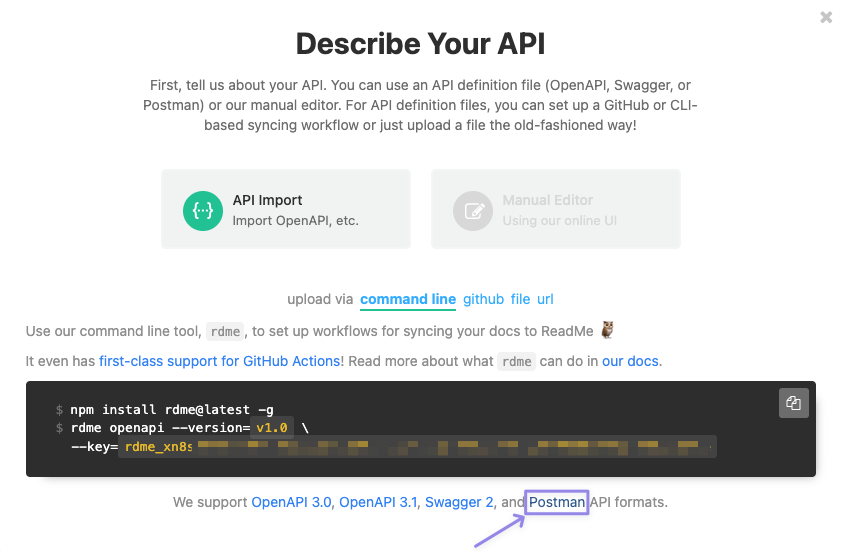 You can import the following file types into ReadMe (either JSON or YAML):

You can add additional Markdown content to each individual file that is imported. These changes will remain even after you re-sync as long as you do not change the operationId or remove the import.

If you add additional Markdown content, be aware that it will be tied to the operationId of that specific imported API definition. If the operationId, or file, is removed, your additional content will also be removed.